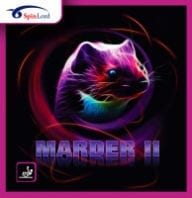 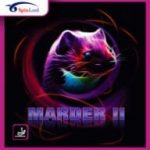 The topsheet is identical to that of the SpinLord “Marder”, but the “Marder II” has a greater destructive effect because of its fast and catapult- like sponge. Unbelievable spin variants are possible with the “Marder II” – sure to unnerve your opponent until you have won. Likewise, a dynamic power game is possible. “Marder II: is the secret weapon of a new generation of.

Players who want maximum speed in addition to maximum spin. In thinner sponge thickness optimal for a ferocious defensive game with destructive strockes.

The rubber surface of the spin Lord marten and the Marder II are absolutely identical, the sponges, however, very different. top rubber is very thin and has very long, inward pimples. Despite the resulting highly elastic interpretation of the rubber surface is additionally very tacky. While classical German / Japanese rubbers produce rotation mainly by their elasticity and Chinese rubbers mainly by their stickiness, martens can do both. The spin values ​​are thus at the absolute top limit of what is without z usätzliches factory tuning is feasible.
Compared to deposits, etc. The game features through their factory-tuning trying to improve the durability of the marten but by far better and also at the upper limit. , the sponge of the marten is very slow, catapult and soft (hardness 35).
MARDER II is a modern defensive rubber with speed reserves.
MARDER II is optimal for the toxic, designed for passive safety undercut with occasional controlled topspin game. In contrast to conventional effetmaximierten coverings, spin Lord marten is also insensitive to incoming rotation. In passive block game is also absorbed a lot of speed.
spinning raccoon Lord but was not only developed for combination with defensive woods.Optimally this flooring with medium-fast and fast blades combined if the player wants to make a side of the racket control even at high speeds. Spin Lord marten allows eg even on fast attacking wood in a controlled backhand side and is the perfect base for all players with significantly different skill level on forehand and backhand , the sponge of the Marder II , however, is quite fast, catapult strong and medium soft (hardness 40). The pace of the Marder II is in the mid range offensive. In thin sponge thickness (1.0 – 1.5 mm) Marder II is the optimal choice for a highly toxic sub-section game with frequent Störschlägen. At 1.8 mm recommended for controlled topspin, in 2.0 mm and max. ideal for a modern, variable, European offensive game even from half-distance. Marder II is ideal for those who miss catapult and elasticity in rubber stamps and Chinese Japanese and German linings, the spin possibilities Chinese rubbers. Marder II is a true all-rounder and can also be combined with all types of wood. Marder II is perfectly finished and very durable.

Note: Due to the fact that the rubber surface by Marder and Marder II are absolutely identical, it follows that the inscription identical to the pads ‘s.

Additional information (1 to 5 star, the more the better for weight. ever more asterisks, the greater the surface) :

Spinlord is a new german brand founded in the year 2009 with the goal of setting a new standard of quality in table tennis. Others are more expensive- SpinLord is better.

Welcome to the table tennis brand of the future